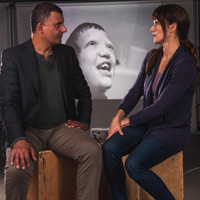 The Boy in the Moon is a three-handed, single act play developed from Canadian journalist Ian Brown’s series of Globe and Mail articles that deals with his son Walker's rare genetic disease, Cardiofaciocutaneous Syndrome (CFC). The play is essentially a conversation between Brown (Marcus Youssef) himself, and his wife Johanna Schneller (Meghan Gardiner). Occasionally, Youssef speaks directly to the audience via a video camera while Gardiner, in one instance, reads a passage from the author’s book.

For the first ten minutes, Youssef, through his character as Walker's father, describes how difficult such (normally) simple tasks like feeding and changing the diaper of a 45lb boy. While Meghan Gardiner as the child’s mother and the couple’s daughter Hayley (Synthia Yusuf) participate in the dialogue, it’s really Ian Brown’s story.

Youssef goes on to explain the boy’s condition is characterized by heart defects, severe intellectual retardation and a contorted facial appearance. We never see Walker beyond grainy black and white projected images. Walker also has the frequent propensity to strike at himself, mainly around the head.

Ian and Johanna battle bravely to provide loving care to Walker while continuing with their professional life. They eventually get help in the form of heroic big sister Hayley and a superhuman nanny. The couple does bicker, as many couples do from time to time. In the early scenes the bickering is by way of good-natured banter. However, as the play develops, the bickering becomes more belligerent, as each parent’s frustration turns to anger at their partner’s perceived lack of commitment.

Youssef and Gardiner work well off each other, showing effective chemistry as they struggle against the odds. Synthia Yusuf, while having much less to do than the lead actors, delivers a nuanced performance as the older sibling who learns to demand less attention from her parents than she deserves or that they would like to provide.

Perhaps the most poignant statement comes from Johanna. Hoping that her son will die before she does seems insentient, yet perfectly understandable. No mother would willingly leave her child unprotected.