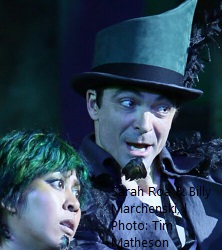 Bard on the Beach
A Midsummer Night's Dream by William Shakespeare

When & Where 8 June– 24 September 2022, Tuesdays through Sundays at 7.30 pm; Saturdays and Sundays at 2pm | BMO Mainstage, under the tents in Sen?ákw/Vanier Park

Midsummer is almost here and magic has arrived early on the stage at Bard on the Beach with Scott Bellis' current production of A Midsummer Night's Dream. Against the backdrop of a decaying palace in the aftermath of an eastern European war, Hippolyta (Melissa Oie), every inch a warrior queen and a uniformed Theseus, Duke of Athens will soon make a political marriage.

Meanwhile, Hermia (Heidi Damayo) wants to marry Lysander (a louche Olivia Hutt) against the wishes of her father (Joey Lespérance) who wants her to marry Demetrius (Christopher Allen), in this production one of Theseus' officers. Her school chum Helena (Emily Dallas) is desperately in love with Demetrius who has recently jilted her. Theseus gives Hermia until his wedding day to make up her mind whether to obey her father or suffer the consequences - death or life in a nunnery. The lovers plan to run away and Demetrius and Helena follow them into the woods, at night. There they collide with the fairy world..

Inside Amir Ofek's graceful magic wood, slipped in front of the palace walls, Oberon (Billy Marchenski) and Titania (Kate Besworth) are conducting a marital war. Oberon's entrance is spectacular, arriving as he does like an Ent, pure Tolkein, towering over Titania and her entourage who are straight out of a 1920's fairy book, winged and delicate. Oberon soon steps off his stilts and into a dashing outfit well-suited to Marchenski’s thoughtful performance. Kate Besworth as Titania is as light as air and cool as ice with a laugh that is crystal cold and other-worldly. She is a formidable figure, until enchanted into love with Bottom, when her actions become earthier, her smile silly.

Also to the wood come the `mechanicals,' a group of amateur actors, local tradesmen and women, all set to rehearse a play for Theseus' wedding day. There are delightful cameo performances from each, especially Richard Newman as Quince and Advah Soudack as Snug/Lion. Bottom is played by Carly Street with enormous aplomb, considerable insight and terrific timing. She sometimes steps outside the play to comment in modern slang with modern attitudes, but then, so does Bottom.

Puck, the trickster figure of European folklore, is the fount of the confusion that follows. It is Puck who puts a spell on the wrong lover and leads all the lovers astray, Puck who transforms Bottom for fun which terrifies the mechanicals and gives Oberon his chance for revenge on Titania, but it is also Puck who finally sets things right in the mortal world. Played by Sarah Roa with bounding and boundless energy, this Puck will undoubtedly find nuance with time.

Costumes and lighting were both wonderful with marvellous effects from both Christine Reimer and Gerald King, respectively. Music and soundscape by Mishelle Cuttler were extremely effective and frequently provided humorous comment on the action.

Tara Cheyenne Friedenberg's choreography which struck me as awkward at first settles as the play continues and will likely settle further.

Four plots, three worlds, and a cast of confused and spell-bound characters means there is always a lot going on in A Midsummer Night's Dream. It needs a steady hand to keep it altogether, but sometimes it seemed that ideas were thrown in at random to see what worked. Not surprisingly, not everything does. It is particularly good to see more larger roles given to women. More than simply changing pronouns, it often reveals new perspectives and interpretations. But in this production, playing against text is sometimes just confusing for the audience. Why should Hermia and a female Lysander so fear a punishment which sends Hermia to a life amongst women? Why should Hermia so fear sleeping close beside Lysander before marriage?

Bellis opted to set this version of the play in the 1920’s, an unsettled time in the world and one with a layer of determined light-heartedness, perhaps to keep the darkness at bay. There is plenty of darkness in Shakespeare’s play, but little of it on display here – unless is has been bundled into Oberon’s dark goblins. On the other hand, there is plenty to hear and think, plenty to laugh at and with, plenty to see and enjoy.