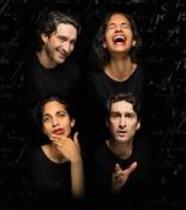 Done/Undone is a very clever and entertaining exposition of current issues in presenting and performing Shakespeare's plays.

Kate Besworth, who grew up in Stratford in a theatrical family, has hacked through the thickets of Bardolatry, academic theory, cancel culture, actors' issues and audience reaction to discuss those aspects of Renaissance life that we now find so repugnant - chiefly misogyny, anti-Semitism, colonialism and racial superiority. She asks, 'should some of these plays not be performed today?'

These are tough matters. With just two actors who in this production are one white male (Charlie Gallant) and one woman of colour, (Harveen Sandhu), Besworth examines the pros and cons though conversations between two actors, two academics, audience members, and The Writer. The Writer (Harveen Sandhu, dressed as Shakespeare in the Chandos portrait), listens to and comments on the various scenes and elaborates on how his work has been interpreted in other centuries with other concerns and social mores - war and revolution, plague and pestilence, sex and respectability. More commentary comes from a pair of white-garbed, fantastical figures in Pam Johnson's bleak set who reel off some of Shakespeare's more unpleasant phrases - context not given or necessary.

In a series of vignettes each pair argues the points. In the 'Play-goers', He goes to a play with Her because she loves Shakespeare and He wants to please. She is astonished that He doesn't get it, the passion, the words, the love. He can look up a quote though - one that sounds good, but not if you look closely.

As The Actor, He says," I am playing Hamlet, how dare anyone say it is not great". She says," but the newspaper critic writes, ‘What’s the point?’"

He, The Academic, says 'We are living Now, why not perform works by living playwrights?' She, also an academic, argues that Shakespeare is for all ages, holds "a mirror up to nature" and shows us ourselves in all our unchanging humanity. 'The Academics' segment is presented in several chapters; the discussion becomes more and more heated, the arguments more personal and the two lecturers less and less cool and collected, ending with a shouting match, jackets off and hair dishevelled.

Ultimately, though the arguments are vividly and carefully presented, the Academics come across as rather more superficial and self-indulgent people than perhaps the playwright intended. `The Board-member' (Gallant) in contrast begins with a self-important doctor talking glibly about a tragic patient death and moves to his passionate response to King Lear's unvarnished words as he mourns Cordelia. Shakespeare's genius with words and direct, unrestrained emotion speaks for him.

And yet - Besworth gives The Writer Richard II's abdication speech, "Now mark me, how I will undo myself With mine own hands I give away my crown". In Sandhu's hands, heartbreaking.

Overall, the play covers a great many issues in Shakespearean scholarship and performance, but the one taking most prominence is the segment titled 'Isabella' (from Measure for Measure) in which the issues of colour and race are thoroughly discussed from the point of view of the actor - a really illuminating section.

This play is also a delightful showcase for the actor's skill. Cunningly assisted by costume designer, Jessica Oostergo, Gallant and Sandhu both give every character a fully inhabited persona, subtly differentiated. Where the playgoers in the earlier segment are English speakers, the couple in the final segment are French-Canadian. Clothes, body-language and intonation are completely different and it does not need Sandhu and Gallant's fluent French to identify them. Hurrah for both, for being bi-lingual, and kudos to Besworth for so economically looking at how foreign-language speakers view and use Shakespeare's plays.

Arthi Chandra's warm and generous direction completely disguised the play's origins as a live stage performance and gave the whole performance an energetic ebb and flow.