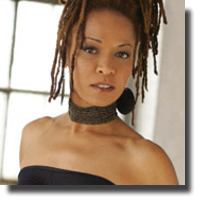 There is a thin line between reverence and exploitation. Lisa Celeste Stroud, who has (rightfully) assumed her mother’s professional name as her own stays comfortably on the right side. Anyone coming to this concert hoping for a younger version of Nina Simone singing all her hits might have been disappointed. Simone is very much her mother's daughter; she certainly possesses the power and timbre of her voice, with even more stage confidence and an ability to engage with her audience, but she is very much her own person with her own vocal style.

Looking sleek in a long-sleeved, wrap-over black dress and 4-inch patent pumps, Simone kicked off her “symphonic debut” with the silky Keeper of the Flame. She followed up with her self-penned, jazz inflected Child in Me. With the ultra bluesy Do I Move You featuring great solo riffs by David Cullen on lead guitar, she showed off some cool dance moves.

In performance, Simone is the absolute perfectionist. About eight bars into the upbeat I’m Gonna Leave You (where I met you) she stopped the orchestra and her side musicians playing to start the song over again from the first note.

She obviously enjoys sharing anecdotes. Leading into a couple of songs from her Broadway stage performance in the Disney musical Aida, she chatted to the audience about serving in the Air Force and her stage debut in the rock musical Jesus Christ Superstar as Soul Sister.

Simone received the most applause for her tour-de-force interpretation of My Way; a Paul Anka composition, though largely associated with Sinatra. Accompanied only by Cliff Starkey on piano, the song obviously has a special meaning for her.

Simone ended the show with the mellow Lilac Wine from her forthcoming CD and a soulful version of Feelin’ Good (It’s a new dawn), arguably one of her mother’s best known songs.

The Orchestra under the baton of Maestro Pierre Simard began the evening in lively fashion with a heady mix of Italian, German and Russian works inspired by fantasies and nursery rhymes. Starting with an enchanting excerpt from Gioachino Rossini’s Cinderella and following with the dark orchestral colorings of Engelbert Humperdinck's Prelude to Hansel and Gretel and Rimsky-Korsakov’s evocative Snow Maiden Suite swept us into the intermission before Simone took over the stage.