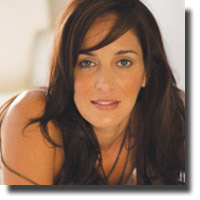 A Canadian superstar teamed up with the VSO on Thursday evening, delighting fans with powerful vocals that permeated the theatre. Chantal Kreviazuk is a multi-talented artist, who has expanded her repertoire of talents from songwriter, vocalist, pianist and guitarist to actor and philanthropist. She is a prolific writer whose extracurricular writing activities keep her busy with constant requests from the film industry as well as artist, the likes of Kelly Clarkson, Gwen Stefani, Carrie Underwood, to name a few.

Chantal appeared on the Orpheum stage right from the get-go. She launched into Ordinary People off her latest album, Plain Jane. Time followed from her 2002 album, What If it All Means Something, with which she showcased her skills on piano. Then it was Wayne, a song she wrote back in the late 90’s, and Chantal commented on how young and naive she was way back in the early days.

Kreviazuk saved her most familiar and popular songs for the second half of the evening’s entertainment. Surrounded, a song she wrote years before, after the death of a close friend, is a staple of her live shows. Other songs, primarily from her latest album, Plain Jane, included Invincible and the title track, Plain Jane. Her ‘encore’ cover hit, Leaving on a Jet Plane, resulted in ecstatic applause and a standing ovation.

There were several times during the concert when the symphony, conducted by Pierre Simard, overpowered the vocals, but I guess this is to be expected when you have three or four dozen musicians sharing the stage with one singer.

Chantal made a number of references to her producer husband, and former lead singer for Our Lady Peace, Raine Maida, and credits him for much of her song writing inspiration. In her ‘between song dialogue’ with the audience, she also lovingly mentions her three sons, indicating the fulfilling life she is enjoying as she embraces family time with demanding career.

It was not a sold out concert, but a respectable number of fans showed up to show their love and support for a genuinely gifted Canadian talent.