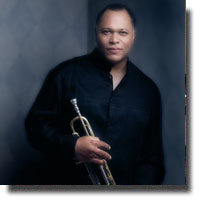 Vancouver Symphony Orchestra: A Night at the Cotton Club

“Welcome to the Cotton Club” – with those five words Maestro Jeff Tyzik with collaboration from the Vancouver Symphony Orchestra and some first rate guest musicians, transformed the Orpheum (at least musically) from a symphony concert hall to a 1930s style Harlem nightclub.

The Cotton Club was a jazz club situated on 48th Street and Broadway, although the original location was on 142nd Street and Lenox Avenue in Harlem. It was made famous by the high level of music played there by the likes of Cab Calloway and Duke Ellington and made infamous because, while the musicians were black, patrons were exclusively white.

It was only the genuinely positive aspects of a Cotton Club revue that a ‘sold-out’ audience experienced last Friday evening (27th May). Trumpet-player extraordinaire Byron Stripling and Carmen Bradford, former singer with the Count Basie Orchestra got the party rolling with It don’t mean a thing if it ain’t got that swing. Stripling then went on to combine his singing chops with his amazing horn-blowing with a bluesy Satchmo- style rendition of St. James Infirmary that also featured a solo by Jack Stafford on tenor saxophone.

Next, it was the turn of the Orchestra to go it alone with a classic big band swing performance of Symphony of Riffs; a tune generally acknowledged as Benny Carter’s most famous composition. Immediately after, the inimitable Ms Bradford was back on stage with a tribute to the late Lena Horne. Her interpretation of Stormy Weather was less soulful than Lena’s definitive version, but Bradford’s subtle improvising style suited the festive mood of the evening.

Just before the intermission Ted Levy stepped (or rather tap-danced) onto the stage to dazzle the audience with a rare display of footwork in a perhaps predictable rendition of the Sammy Davis Jr. inspired Smile darn you, smile. Stripling joined Levy on stage to bring the first set to an electrifying close with a powerhouse mix of dance, song and comedy on I got rhythm.

Like the title of the book he authored, Bob Breithaupt is the “complete percussionist.” Opening the second set together with the VSO in the Chick Webb transposition of Clap hands here comes Charley; he gave an awesome demonstration of virtuoso drumming.

Byron Stripling is a charismatic performer who draws the audience into his music with energy and verve that is reminiscent of Louis Armstrong. In a Cotton Club medley that included Mood Indigo, the Atlanta born trumpet-master fulfilled “a lifelong ambition” taking a seat in the Orchestra’s brass section.