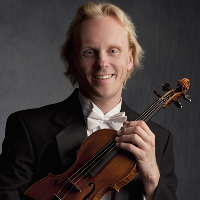 The stellar Tea and Trumpets concert series hosted by the Vancouver Symphony Orchestra has become a notable fixture on the Vancouver classical music scene. The March 3rd performance ‘Beautiful Baroque’ at the Orpheum Theatre added further to this illustrious reputation.

As noted by the urbane and well informed afternoon host, Christopher Gaze, the word ‘baroque’ was derived from a Portuguese word meaning a pearl of irregular shape. It was used to describe a thing of beauty that has some quality of strangeness or uniqueness to it. The word ‘Baroque’ also refers to a style of architecture that was developed in Europe in the 17th and 18th century, notable examples being Notre Dame Cathedral in Paris.
With his sonorous voice and classical sensibility, Gaze, well known to Vancouver audiences as the artistic director of the ‘Bard on the Beach’ summer theatre series, is well suited to host Tea and Trumpets. He adds a solid narrative to the performance.

With Baroque, we certainly experience a musical form that is both beautiful and unique thus constituting as it were a genuine musical ‘pearl’ of symphonic sound.

Dale Barltrop was the leader and lead violinist for the concert. Mr. Barltrop hails from Brisbane, Australia and has performed across North America to the delight of audiences. He was particularly suited for the Beautiful Baroque concert given his experience as a soloist with the SPCO. He is also a regular artist with the Mainly Mozart Festival in San Diego and the Festival Mozaic in San Luis Obispo.

The eighteen member orchestra led by Barltrop performed with fluid grace. The extraordinary precision and beauty of the violin ensemble resonated well in the full theatre. The music was neither overpowering nor too delicate.

The final piece, Vivaldi’s Four Seasons, played beautifully, evokes a range of emotions much like the range of colors and feelings that the four seasons of nature bring forth. The joy and appreciation of this special concert was clearly visible in the faces and mood of the sell-out crowd in attendance.