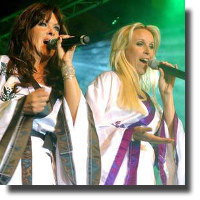 Vancouver Symphony Orchestra
Arrival from Sweden! The Music of ABBA

The global appetite for tribute shows is perhaps easily explained: Many of us who lived through the seventies find ourselves with a proclivity to revisit the past at every opportunity that presents itself. Recent years have seen such bands evolve from mere cover performers to pitch-perfect imitations of original songs and stage shows.

Like Swedish based Arrival from Sweden's tongue-in-cheek retrospect of supergroup, ABBA; the four band members, plus six side musicians including three female back-up singers, transport the audience back through the years with all the ABBA favourites: Fernando, SOS, Mamma Mia, and Waterloo.

Arrival from Sweden formed their moniker from the title of ABBA’s 1976 album (that’s the one with the helicopter on the cover). As if to emphasize their first ever arrival at a Canadian venue, Vicky Zetterberg, Jenny Gustafsson, Rolf Ivraeus and Jonas Karlsson are ushered on the stage to the whirr of a helicopter to join members of the Vancouver Symphony Orchestra.

Founding member Vicky Zetterberg who takes on the role of Anni-Frid Lyngstad (Frida) and her vocals partner, six-foot tall blonde Jenny Gustafsson taking on the role of Agnetha Faltskog opened the show with a bewildering Swedish language version of Ring, Ring. The ‘girls’ dressed in ABBA trademark white satin “pyjamas” move right ahead with Knowing me, Knowing you and a song the band liked to dedicate to recently married (Swedish) Crown Princess Victoria – I Do, I Do, I Do.

Hearing the songs introduced in Swedish accents gives the show a quaint authenticity. Thankfully, the band doesn’t just perform songs popularized by the musical Mamma Mia, but re-introduce the audience to some of Abba’s less well-known songs like Tiger, So Long, the pseudo-classical instrumental in the tradition of Emerson, Lake & Palmer, Intermezzo No.1 and I Wonder from Ulvaeus and Andersson’s mini-musical, The Girl With The Golden Hair.

ABBA is remembered for being a four-piece band, with the two guys, Bjorn Ulvaeus and Benny Andersson frequently performing songs on their own. Ulvaeus especially was the consummate showman, who introduced the songs and playfully jested with his band-mates and the audience. Guitarist Jonas Karlsson who has the responsibility for emulating Bjorn’s stage performance adopts a much lower profile, preferring to surrender the spotlight to his band-mates.

Only bassist Mike Watson, who hails from Sheffield, England, was introduced to the audience. Now in his sixties, he was one of ABBA’s original session musicians contributing on notable tracks such as SOS, Mamma Mia, The Winner Takes It All, and Super Trouper – all of which were covered in this evening’s performance.

The band left the stage briefly, but returned for the predictable encore to sing Summer Night City, Thank you for the Music and of course, Dancing Queen, which had the sold-out audience on their feet. Arrival from Sweden certainly provided an energetic and entertaining tribute, yet lacked much of the polished professionalism of the original group. Also, I would have liked to have heard a couple of symphonic versions of ABBA’s tunes played by the Vancouver Symphony Orchestra led this evening by Maestro Pierre Simard.

I guess nostalgia just isn't what it used to be.