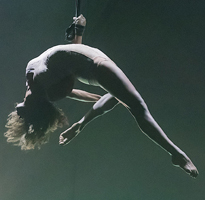 Les 7 Doigts is a Montreal based circus company with a talented gender balanced troupe that performs an amalgam of acrobatics, dance, music, puppetry and comedy with precise execution. Last autumn, just as the COVID pandemic was starting to push back after a summer decline in new cases, Les 7 Doigts, embarked on a bold venture. Designers and artists came together to create a non-contact show that would actually integrate social distancing. Unfortunately, Montreal downgraded to a red zone which made live audiences improbable, so then Isabelle Chassé and Gypsy Snider wisely switched to a digital recording format.

I actually have to consider whether “Circus” is the correct decription for this particular company of performance artists. Les 7 Doigts is certainly not the Barnum & Bailey or even Cirque du Soleil that we could take the kids to.

Out of Order (French trans. En panne) doesn’t have a straight line narrative, but has an obscure theme of prohibition with intentionally grotesque elements. Costumes vary between garish and minimalist. The artists demonstrate incredible balance and agility in the physical aspects and scintillating style in the theatrical aspects.

There is no ringmaster in this production (nor likely in any Les 7 Doigts shows), though, Vincent Jutras appears to take over the role of ad hoc Master of Ceremonies. At times there can be the entire cast performing on stage simultaneously, other times, a solo act like Antino Pansa’s high-wire feat on a provisionally assembled apparatus.

There are no conventional clowns, though Vincent Jutras delivers much of the madcap comedy on hand. In a bizarre auction stunt, a fork fetches two million dollars – no one sees the winner actually pay up. Samuel Renaud and Louis Joyal perform the hand to hand Russian cradle maneuver that requires the strength of Renaud and the balance of Joyal.

One of the most versatile artists is the incredibly watchable Tuedon Ariri. Formerly with Cirque Eloize, she took part in the Vancouver Olympic torch relay when only a teenager. Her dance movements are profuse with purpose and her skill with the hula hoops is absolutely mesmerizing.

Out of Order’s post-apocalyptic setting is (hopefully) more tongue-in-cheek than a prediction. I’m personally optimistic that Les 7 Doigts next production will be designed for live audiences.