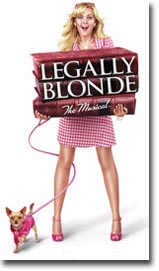 Legally Blonde the Musical is the high-octane, musical theatre adaptation of the popular 2001 movie that featured Reese Witherspoon. It combines hare-brained romantic comedy with Théâtre de l'Absurde and throws the handbook of cliché right at the audience. That’s not to say that providing you can forget where you are and completely detach yourself from reality; the show isn’t going to be immensely enjoyable.

Laurence O’Keefe and Nell Benjamin’s songs are functional, though, with a few exceptions hardly memourable. The opening number, Omigod, you Guys is corny, yet catchy and sets the tone for what is to come.

Nikki Bohne (a natural brunette) is likeable in the central role of Elle Woods, who chases after her boyfriend all the way from Malibu to Harvard after he dumps her over the side. She shows a natural flair for physical comedy, sings and dances well, and delivers ludicrously puerile lines without looking obtuse. She also has enough stage smarts to allow Bruiser, her cute chihuahua (alternatively played by Frankie and Chico) to steal a few scenes.

The oldest cast member Kahlil Joseph, who has the only serious role, is impressively pompous as the lofty, gung-ho law professor. His tongue-in-cheek delivery of Blood in the Water was sublime.

So what if Legally Blonde pokes a little fun at stereotypes? Certainly, in another context it might be deemed offensive, but this show is so outrageous. It doesn’t just stretch credibility; it contorts it beyond reason, though it’s never less than a charming faerie-tale with a noble message.

It manages to pull it off by virtue of its exuberant cast, who might just be the best-looking and fittest group to be seen on a Vancouver stage for quite a while.