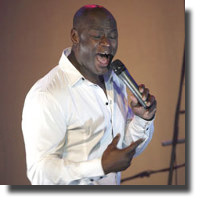 Ola Onabule was such a hit at last year’s Vancouver International Jazz Festival where he performed at Performance Works, that organisers felt compelled to invite him back again this year. After a short drive north up Highway 99 from his previous gig at the Coast Capital Playhouse in White Rock, Onabule brought a new group of musicians with him to perform at the Commodore, featuring players on guitar, keyboards, saxophone, trumpet, bass and drums.

The singer’s incredibly flexible, three-and-half octave range that enables him to traverse such diverse musical genres as blues, R&B, soul and mainstream jazz has made him hugely popular in Europe. So far though, his talent has been a well kept secret in North America, but all that may be about to change. With a ninety-minute set full of passion and energy, he surely added to the ranks of his growing legion of local fans.

Onabule stepped on the stage looking immaculate in a sharp grey lounge suit, white shirt and tie, and leaped straight into an appropriately upbeat Step into my World (may not be exact title). With the music even hotter than the warm still air inside the Commodore Ballroom, I wondered just how long the dynamic singer could maintain his impeccable appearance. As it turned out, three songs into the set, the jacket and tie were gone.

The band continued to wow the audience – most of them having taken to standing on the dance floor in front of the stage – with songs from Onabule’s last couple of recordings: The Devoured Man and In Emergency, Break Silence as well as new material yet to be released.

His set was both soulful and spellbinding, displaying the artistry of a consummate entertainer, supported by an accomplished six piece band playing it tight on the politically charged Great Expectations and loose and expansive on the concert closer Soul Town. It’s a pity that the Commodore’s sound system didn’t match the calibre of the musicians. It certainly didn’t lack volume, but the clarity that Onabule consistently brings to his recordings was missing.

The band’s frontman is not particularly good at introducing his songs - he may feel that titles aren’t that important. He does however, engage the audience with his natural charm and humour occasionally offering good-natured advice on relationships.

Ola Onabule and his talented band gave an immensely satisfying show, winning over not only those who have seen him before, but also those experiencing his special brand of music for the first time.

An Interview with Ola Onabule

Ola Onabule has been a recording artist for fifteen years, initially with Elektra, but eventually starting his own recording studio under the Rugged Ram Records label. Born in north London to Nigerian parents, Ola spent half his childhood in England and half in Lagos, Nigeria.

Ola could have easily made a name for himself turning out covers from the Motown catalogue, but to his credit has preferred to take the road less travelled. He writes, arranges and produces all his music which can include songs that are multi-layered and lyrically complex.

I met up with the articulate musician at O'Doul's Restaurant & Bar on Robson Street shortly after he and his band had checked into the Listel Hotel. He immediately spoke about how happy he was to be back in Vancouver and part of this year’s Jazz Festival. While he admitted to never meeting Meshell Ndegeocello whom he would be sharing the Commodore concert gig with later that evening, he professed an appreciation for her musical style.

In talking with Ola, one gets the impression that he holds definite ideas about social justice and fair play. Perhaps it’s a ‘hold-over’ from his original career choice of Law? When I asked him about quitting law school when he almost had a degree in his grasp, he was philosophical. “I believe I would have enjoyed a career in law, but I just felt it was always going to be music for me” he divulged.

On the question of his Nigerian heritage being a major component of own musical style, he responded in his typical matter-of-fact manner – “I don’t consciously accommodate African cadence in my songs.” “It all really happens organically” he added.

Being born in London of Nigerian heritage, one might surpose that he is big on Soccer. While he concedes to following the fortunes of his ‘local’ team Arsenal in the English premier league and did manage to watch a few of the ‘World Cup’ games, he is not nearly as fanatical as many of his countrymen.

It has been fairly well documented that he was personally selected by David Beckham and Victoria Adams to perform at their wedding on July 4, 1999 at Luttrellstown Castle, Dublin. He was understandably reticent to talk about the Beckhams, but acknowledge that they both behaved towards him and everyone else with courtesy and respect. (Something we might all want to aspire to).

Ola Onabule is his real name as well as his professional name – or at least a part of it. His birth certificate will state his full name as Olatunji Olugbenga Omotayo Olanrewaju Adetokunbo Abdul Majeed Onabule. He mentioned that he is frequently amazed and amused when fans and friends take the trouble to memorise his entire name. However, he won’t complain if Canadians only remember ‘Ola Onabule.’