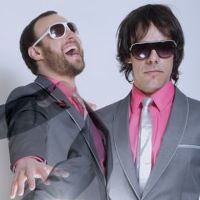 A huge favourite at last year’s Montreal Jazz Festival, this bilingual Quebec band has made a unique niche in taking generic pop songs from the eighties and re-arranging them in the style of gipsy jazz reminiscent of Django Reinhardt. Interestingly, this acoustic trio took their name from Django Reinhardt’s missing two fingers.

However, despite their unusual name, there is nothing digitally challenged about these guys. Dressed in identical salmon pink suits and green shirts, Messrs Morrissette, Roberge and Mikaloff stepped across The Vogue stage and immediately broke into their own rendition of Tainted Love. Supposedly giving in to some “guilty pleasure” they followed up with Paula Abdul’s Straight Up.

The trio brings a keen sense of fun to their live performances and refuse to take themselves seriously. Guitarist Christian Roberge handles most of the lead vocals while Byron Mikaloff acts as spokesman, often with tongue firmly in cheek. Mikaloff was likely only half serious when he announced that the next two tunes on the playlist as “great Canadian songs.” Safety Dance composed by former Montrealer Ivan Doroschuk, who now lives in B.C. lends itself agreeably to a jazz arrangement, while the band’s take on Sunglasses at Night was brighter and livelier than the Corey Hart’s moody original. Even with such quixotic treatment of these tunes, the melody lines are still easily discernible.

By way of acknowledging the large number of Francophones in the audience on Quebec's Fête nationale, the trio obliged with a handful of French songs, including Ça plane pour moi – a song made famous by Belgian singer Plastic Bertrand and Ça fait rire les oiseaux (trans: it makes the birds laugh) that French–speakers in the audience seemed to recognize as traditional.

Lost Fingers finished their ninety-minute set with the crowd-pleaser Pump up the Jam which ends most of their live concerts. At the crowd’s insistence the band returned to the stage for a generous encore that included Kool and the Gang’s hit, She’s Fresh (Exciting).

The organizers of this year’s Vancouver International Jazz Festival certainly chose a great show to kick-off the HondaTM Vogue Series of concerts.