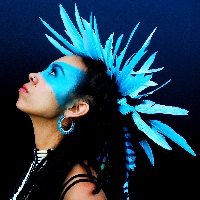 With typical Vancouver irony, Canadians sought out an Australian band to entertain them on Canada Day. The multi-genre Blue King Brown might best be defined – if it’s even possible to define them at all – as urban world fusion with obvious inspiration from Santana and Bob Marley. Carlos Santana was known to describe the group as “The voice of the street and the band of the future” after taking them on one of his tours.

The group is fronted by the phenomenal and often controversial Natalie Pa’apa’a. Not really beautiful in the conventional sense, though with a mass of dreadlocks bound in a black headscarf and natural Samoan looks, she’s incredible watchable. When swirling around on stage in pseudo aboriginal style dance, belting out reggae inflected, funk tinged songs, she is totally mesmerizing. She brings an attitude of self-awareness that has no doubt developed from some tough times.

The band is not that well known outside of their home base of Melbourne, Australia and their music not that familiar, but that could change now that they have released their first CD in North America and performing high-energy live shows such as the one seen last Friday night at The Venue in the Granville entertainment district.

The band doesn’t have a huge catalogue of original songs, but they certainly aren’t afraid to jam out and improvise live. Salvador Persico, the band's percussionist is a master of improvisation.

The first one (that I recognized) was the soulful Say Peace. Other tunes of varied tempi followed like Water (for the fire) and Women's Revolution delivered with a forceful reggae backbeat. Then, the hip-hop styled Never Fade Away and back-up singer Jessica Ferguson’s own tribute to Bob Marley, Is This Love?

This talented group of musicians gave an immensely satisfying show, winning over many new fans who may have experienced Blue King Brown’s unique brand of music for the first time.