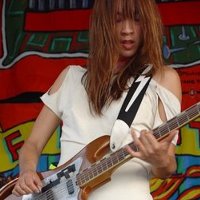 The first clue that it was going to be a very long night was when door security (politely) informed that there were going to be no re-entries allowed. This likely meant that venue management was anticipating lengthy delays. It has been so long since I stopped going to rock concerts that I had forgotten what it was about. Like the air thick with the sweet, pungent smell of pot (though on this occasion confined to the washrooms) and the long wait before seeing the headline band on stage.

So, what is a multilingual alternative rock band doing playing at a jazz festival? Commercially it makes sense: the band’s front end of its current tour of ten cities through western Canada and the US coincided with the first weekend of Vancouver jazz festival and they are after all a known quantity.

Okay, so what about the music? When Blonde Redhead finally appeared on stage at 10.20pm, they performed songs mostly from their recent album Penny Sparkle plus a few of their better known songs from previous recordings, such as Spring and by Summer Fall and 23. The latter is possibly familiar outside of the band’s loyal fanbase since it was featured on an episode of Grey's Anatomy as well as the Pontiac television commercials.

For three musicians they produce an incredible phat sound. And certainly, there is a hypnotic ethereal quality to Kazu Makino’s breathy mewlings, but she gets through the band’s complex songs with minimum range and the lyrics may as well be in a foreign language – they’re so incoherent.

Amedeo Pace also covers occasional lead vocals in addition to a range of guitars and keyboards, but it’s the other Pace brother, Simone, with his tight percussion that anchors the band's otherworldly dense structures.

If anything, Blonde Redhead’s repertoire suffers from the spectacular over-production; frequently indulging in billowy techno-poetry. Nevertheless, there were plenty of folks in the audience that loved it and probably didn’t realize that there was a Jazz Festival going on.

At no time did any member of the band attempt to engage the audience, announce the songs, or introduce band-mates. I suppose they considered the music spoke for itself - I'm not so sure.

Montreal Indie band The Luyas whose last gig in Vancouver was at the Cobalt, opened with a 30-minute set. Their line-up comprises of French horn player Pietro Amato, vocalist Jessie Stein, drummer Stefan Schneider and keyboard player Mat Charbonneau. It may have been the fault of the sound system, but the quartet failed to excite even this enthusiastic crowd. They played their last song in darkness completely unseen; it might have been better had they also been unheard.