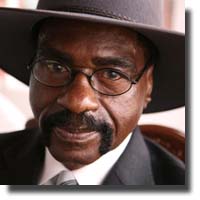 Anyone who saw the Norman Jewison controversial film "The Hurricane", listened to Bob Dylan’s song Hurricane, or read Nelson Algren's book, The Devil's Stocking would surely be curious to find out who the real Rubin "Hurricane" Carter is. Whether one believes he was innocent or guilty of the infamous triple murder, Carter’s real-life story is infinitely more fascinating than of the Hurricane portrayed in the movie.

Carter fought professionally as a middleweight boxer from 1961 until his arrest in 1966. He and his co-accused, John Artis twice stood trial for the murders in Paterson, New Jersey, both times ending in a conviction. The two men were finally exonerated of the crimes by Federal Court Judge H. Lee Sarokin, who ruled that the state withheld crucial evidence.

Dr. Rubin "Hurricane" Carter’s current book tour in support of his second autobiography, Eye of the Hurricane: My Path from Darkness to Freedom co-authored with Ken Klonsky, brought him to Capilano University Theatre this week.

At age 74, he still looks remarkably fit. Wearing a tailored grey suit and his trademark brown fedora hat, he pranced back and forth across the stage, pausing only for an occasional sip of water. A packed auditorium sat transfixed by the enigmatic former prize fighter who spoke for roughly 45-minutes.

Carter began by paying a tongue-in-cheek homage to Denzel Washington’s screen portrayal in the 1999 film that chronicles the events of the Lafayette Bar and Grill from his own perspective. He didn’t go into detail about the facts of the incident, but described himself a victim of the American Justice System.

Carter then continued to talk about his journey through his difficult early life up to his current role as a crusader for the wrongly convicted. His views on the American penal process were profoundly disparaging and uncompromising.

As a motivational speaker Carter is a minor disappointment. He preaches a personal brand of philosophical criteria that occasionally transcends to a passionate rant. His most affecting and provocative remarks came in response to an audience member’s question in a Q & A session mediated by host Neil Boyd. He wholeheartedly condemned the RCMP for their contentious “Mr. Big” operation that drew false confessions and an eventual conviction of British Columbians Sebastian Burns and Atif Rafay.

The audience’s response was unanimous applause. It would seem everybody loves a survivor – and Rubin Carter is certainly that.