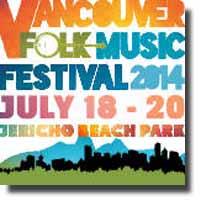 I considered myself very lucky as I went through the gate to the 37th Annual Vancouver Folk Music Festival on Friday afternoon because this year’s three days would be a global musical smorgasbord with 62 acts from 11countries. Besides that, what’s not to love about hearing great music in Jericho Park’s breathtaking natural setting? Of course, I was also really looking forward to hearing folk music legend Joan Baez, who unfortunately had to cancel her performances because of viral laryngitis.

The opening act Makoomba, a group from Zimbabwe, kicked up the energy of the festival with their compelling rhythms. So, soon people were moving off their blankets in order to get up and dance. These six talented young men grew up together in the same neighborhood and became a musical group in 2002. I had a chance to speak with Abundance Mutori, the bass player, who speaks three African dialects as well as English. He told me, “Our music is Afro-fusion because of all of the different cultures and languages that surround us in Victoria Falls.”

After Makoomba’s funk-laden start, I checked out the line-up on the seven stages and realized that no matter how fast I would run around the park, I would not be able see all the performers I had wanted. My new plan then, was to make a tentative list, but to also meander along the pathways through the park to allow some serendipitous musical discoveries to happen.

On the soggy Saturday morning, as the rain was just stopping, a few great gospel and blues groups were nestled away on Stage Two. When Samantha Martin and Delta Sugar sang “Drift Away,” music fans stood swaying contentedly beneath the trees to this soothing melody.

A musical highlight for many of us was the discovery of blues singer Leo “Bud” Welch from Sabougla, Mississippi. The Vancouver drummer who accompanied him on stage called out, “Leo released his first CD at the age of 81!” This prompted hardy applause from the audience. I learned from Leo’s manager Vencie Varnado that Leo had started playing guitar back in 1945 when times were so tough that he had to sneak out his older cousin’s guitar. After mastering the blues, Leo never stopped playing his guitar during the thirty-five years he earned his living by logging. On stage, Leo poured his heart into lively versions of “Got My Mojo Working,” “Cadillac Baby,” and especially the gospel song “Me and my Lord.” At 82, he was an absolute inspiration to us all!

The Vancouver Folk Festival uses the coordinated team effort of the 1,500 volunteers to make each year a pleasant musical event to attend, rain or shine. Everything has been thought of too: an arrangement of covered platform seating for those with special needs, a Little Folks Village for the kids, sign language interpretation of certain performances, a comprehensive recycling program, a bicycle parking area and of course, a well-attended Beer Garden for the thirsty fans.

For shoppers, this year’s Folk Bazaar booths were selling crystals, Tibetan prayer shawls, Persian rugs, leather belts and bags, as well toddler ball caps that said “Daydreamer.” The Vancouver Folk Festival is definitely a great place to daydream and sample music from around the world!