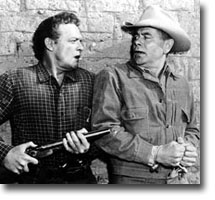 Delmer Daves’ 1957 original 92-minute film in glorious black n’ white was, and still is more than just a western. Its taut drama and human tensions made it popular among audiences and critics alike. Glenn Ford is brilliantly phlegmatic playing against type as the charming, yet ruthless outlaw Ben Wade and Van Heflin is earnestly self-loathing as the down on his luck rancher turned reluctant hero Dan Evans.

It is also well worth watching for a tongue-in-cheek performance by Henry Jones as the town drunk and a stellar performance by then thirty-year–old Richard Jaeckel as Ben Wade’s sidekick Charlie Prince. Both went on to establish themselves as two of Hollywood's most prolific supporting actors.

When Ben Wade is arrested in a small town saloon, the local sheriff hatches a plan to secretly transport him to a railway station in Contention City, then put him on a train to Yuma and stand trial for murder. No one wants the job of escorting Wade on the journey to Yuma so Evans signs up for the $200 fee.

The film plays off the psychological sparring between the two men who each have their own guarded code of honour. Predictably, Evans is deserted by everyone and is thus faced with the dilemma of being the last man standing between Wade and his gang or letting the outlaw go free.

It took exactly 50 years for director James Mangold to believe that the film was worth remaking. The remake with Russell Crowe as Ben Wade, Christian Bale as Dan Evans and Ben Foster as Charlie Prince was also a cinematic success, but for me, it doesn’t quite have the same charm as the original nor does it have the late, great Frankie Laine singing the title song.