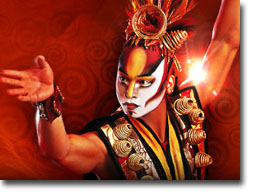 Since its 1999 premiere in Montreal, this production has delighted and amazed over seven million people around the world. At tonight's show, an arena full of Abbotsfordians became the newest audience inductees to be most definitely dazzled.

Dralion features 50 performers - acrobats, gymnasts, musicians and singers - who take to the Sky, Sea, and Earth to represent the four elements - Air, Water, Fire and Earth, overseen by the character “Little Buddha” (Lia Paredes). The show’s name Dralion is a combination of the traditional Chinese Dragon (representing the East) and Lion (representing the West) and even featured several dancing dralions, who are more nimble creatures than you’d have guessed from the description above. Crowd favourites of the night included Amanda Orozco performing the Aerial Pas de Une, hand balancing superstar Han Yuzen, and juggler Vladislav Myagkostupov. This show was great family entertainment – I noticed audience members ranging from kindergartners to their grandparents, and while there was some minor risqué humour for the adults, it went well above the heads of the kids in the crowd.

It was the clown act – Vincenti (Juan Carlos Bratoz), Alberti (Michael Edward Hugues) and Giovanni (Facundo Gimenez) that really stole the show with their silly antics and audience interaction. The clowns helped audience members with their coats before the show began, taped the entire front row to their seats, and even arranged an impromptu wedding (complete with confetti) for one unsuspecting audience member attempting to walk down the aisle to find her seat.

The most impressive act for me was the gravity-defying trampoline scene featuring the talents of Yakau Rakitski, Alex Cuenca, Hiroi Tokuma, Marina Vorobyeva and Dmytro Negodin. These performers nimbly bounced from trampoline to platform, and even ran up walls, causing the audience members around me to repeat the same word over and over – “How? How?” Other jaw-dropping acts included a human pyramid of acrobats skipping rope, and a scene with a dozen performers jumping through hoops that caused the audience to collectively hold its breath until they finished. What was refreshing about Cirque’s show is that even though the performers are all professionals who have likely been performing the show over and over, they never looked bored. Rather, they smirked and grinned at the audience after performing a particularly challenging stunt as if surprised to be able to say “Gee, I’m glad that one worked out for me tonight!”

The show was a visual delight, with gorgeous costumes (featuring unusual materials ranging from emu feathers and horse hair to window screen and bubble wrap) and a fascinating futuristic set complete with trapdoors. Perhaps the best part was the live band and singers - the evening would have been enjoyable enough just listening to the music, let alone the mind-blowing feats performed alongside it. The Abbotsford Entertainment & Sports Centre was the perfect-sized arena to enjoy a show of this nature – large enough to allow for the aerial acts yet intimate enough to enjoy the action from any seat in the house. This was my first time seeing a Cirque du Soleil show and it definitely won’t be my last!