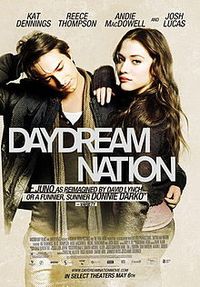 Focus is the problem of this film. There are just too many sub-plots. There's the love triangle between Anderson (Josh Lucas), Thurston (Reece Thompson) and Caroline (Kat Dennings). Then other sub-plots: the industrial fire, the serial killer, kids on drugs, and more. There are also so many cliches and a lot of melodrama on adolescent confusion and angst. I get the feeling that young Canadian filmmaker Goldbach likes soap operas, murder mysteries, and hates male pedophile English teachers.

What he does in his script is jostle all these plots together to come up with a movie which reflects the novel written by Anderson and described by Caroline as "self-pitying" and "vapid". Dialogues using"immature", "stupid", and "I'm sorry" are also used in this film . Well, let me repeat the same words Goldbach uses in his script because this is what I feel about this film and I'm sorry, but it's vapid, stupid and immature.

The same old topic of drugs and conflict between children and adults is hammered in, and we have the same old adage of how adults are as immature as teenagers. Even the title of the film isn't original. It's the title of an album released in 1988 by a rock band called Sonic Youth.