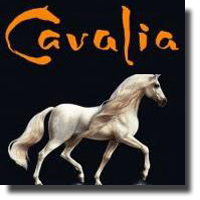 A Magical Encounter between Human and Horse

What a show! This exciting equestrian extravaganza was a big wow for the opening night audience last March 22nd! You could hear the ooohs and aaahs from young and old alike as acrobats, dancers, aerial artists together with 49 magnificent horses and live music celebrated in magic and dreamlike fashion this fabulous spectacle.

Critics across North America and Europe have raved over this show which was envisioned and created by Normand Latourelle who co-founded Cirque du Soleil in 1985.

Cavalia is a tribute to horses and a celebration of the relationship that humans and horses have shared together. Throughout the programme, we see the history of how humans have related to horses, from the beginning of indigenous times, to the medieval and renaissance periods, up till today. We also see all peoples participating, from the Terracotta warriors in China, to the Spanish El Cid period, and of course, the Arabians where those beautiful Arabian horses came from.

The programme started with horses Roucao and Rocky coming onstage with vocals by Mary-Pierre Guibault, followed by Jennifer Lecuyer and the horse Orion, in a dreamlike presentation, with fabulous light effects.

And then came the Cavalcade which awed the audience as eight beautiful horses --Junior, Spirit, Tori, Poncho, Cisco, Bungee, Joe and Tobby -- galloped in with their riders and acrobats Ahchoune, Mouid, Aubron, Beaugnon, Omar, Barhihi, Diotte, Pinte, and Panteleenko. From these artists’ names, I could tell that they descended from a family of horse riders, The Arab names are probably descendants of Arabs, or perhaps Afghan, as Afghans are known for their prowess in horse riding.

Next, in the first part of the programme, as in the second, is Liberté with trainer Sylvia Zerbini who, according to an interview we made with her, trains her horses Alydar, Beijo, Gamlett, Gazi, Nezma, Riccardo, Zarab, Shagal, Tonner and Zajin 16 hours a day! No wonder we get perfection as she leads these horses round and round, doing all kinds of tricks.

Indeed this was more than just a Three Ring Circus the way I knew it as a child. With modern technology, sounds, lights and special effects, shows like this, the modern circus, has evolved into high tech dreamlike spectacles.

The show has been extended here in Vancouver until April 17th. For as little as $54, this show is worth more than the asking price. For more info and comments on this show, check the following sites: www.cavalia.net, www.twitter.com/cavalia or www.facebook.com/cavalia.

Humans and horses have shared a special relationship for several centuries. It’s a phenomenon not lost on Normand Latourelle when he quit Cirque du Soleil to fulfill his own vision of grand scale entertainment. Mammoth productions are something that Latourelle knows something about and shows don’t get much bigger than Cavalia.

When the pragmatic Montrealer and his top trainer, “horse whisperer” Sylvia Zerbini welcomed the media to the site of the “White Big Top” last Thursday (17th March) he freely admitted, though surely with a degree of understatement, “I really knew nothing about horses when I started this venture in 2002, but now I’m becoming a bit of an expert” he said with a faint grin.

Listening to him describe the different breeds of horses that perform in the show and the special characteristics that each type of horse brings and how they are trained, he comes across as being much more than “a bit of an expert.” In the fifteen minutes that Latourelle spoke about what audiences could expect to see in Cavalia he never once referred to the horses as ‘his horses.’

There will be a total of forty-nine horses brought the Vancouver venue split roughly fifty-fifty between stallions and geldings (no mares) with no less than twelve different breeds represented. Among them are thoroughbred Arabian, Argentine Criollo, Lusitano and Quarter horses.

Latourelle was likely half joking when he mentioned that the horses trained en liberté were “essentially Francophone.” Though sure enough, when later seeing a demonstration put on by former circus acrobat, now full time trainer Sylvia Zerbini, the horses responded appropriately to her (usually French) commands. Zerbini knows every single horse by name and where each animal fits in the herd hierarchy. En liberté means simply that the horses work without bridle or reins. Zerbini communicates to the horses in nothing much louder than a whisper, but instinctively senses any changes in disposition. “The most in important aspect of training is keeping the horses mentally alert” she disclosed.

Just like any other top entertainers, these stars hate boredom.