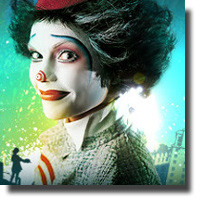 As devoted fans of Cirque du Soleil know, their unique brand of entertainment is not simply a show, but a performance event. With Quidam, the audience was treated to a spectacle of sight, acrobatics, color, dance and comedy that further cements the company legend worldwide.

The circus is a perennial form of entertainment that harks back centuries. What Cirque Du Soleil has done is revive this unique form of entertainment and bring a contemporary look to the shows and the added luster of technology. However, the raw basic ingredient remains the same and that is the spellbinding physicality of movement and acrobatics that no common citizen can ever hope to replicate.

There were several standouts acts in the evening performance at Rogers Arena. ‘Skipping Ropes’ featured the artists Kata Banhegyi and Norihisa Taguchi and the House Troop. As the ropes beat time, a group of twenty acrobats, with extraordinary coordination and rhythm, perform a steady stream of solo, duo and combination jumps and movements. It was a remarkable piece.

Another crowd please was the ‘Aerial Hoops’ that saw the performers Julie Cameron, Lisa Skinner and Meaghan Wegg exercise stunning feats of movement with the aerial hoops.

As clowning is an essential part of every circus, the evening featured the clever and fast paced comedy of clown Toto Castineiras. He was adept at bringing audience members onto the stage and moving them through the paces of comedy skits that kept the audience amused.

Perhaps the coup de grâce of the evening was the piece ‘Spanish Webs’. Artists fly over the stage attached to a specially designed conveyer called the telepherique. The ropes are then lowered with the artists attached to them. It appears mythical and ethereal. Artists Mireille Goyette, Viktor Katona, Rafael Munhoz, Gracie Oliveira de Moura and Denise Wal were dazzling.

Another spectacular scene is found in ‘Banquine’. In this work of art and acrobatics, 15 artists perform extraordinary sequences of acrobatics and human pyramids. The timing is and must be impeccable. It is precision dance and acrobatics at its best. In one part, a young, lithe dancer is tossed and flipped from one human pyramid to another. The movement flows with grace. One is further impressed by the fact that there are no nets or landing pads.

With every great event, the time went fast but left the audience with dazzling feats to ponder for many years to come.