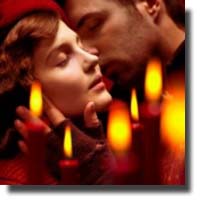 Pacific Opera’s production of La Bohème updates Puccini's seductive tragedy to the 1930s Paris, by then, a worldwide center for the artistic avant-garde. This transposition, along with John Ferguson’s extravagant revolving sets and handsome clothing (far too conservative for poverty-stricken Bohemians), tends to remove the original “grittiness” and brings more into focus the opera’s grandeur of passion.

It was a minor surprise to learn from the pre-show announcement that Gerard Powers would sing the role of Rodolfo, once again replacing Luc Robert who was unable to perform due to illness. The youthful looking Mr. Powers was parachuted in from the U.S. at short notice to make his Pacific Opera Victoria debut as Rodolfo, a role he sang previously with both the Gothenburg and Utah Opera companies.

When the story of La Bohème opens on Christmas Eve in Paris, we see two poverty-stricken young bohemians, Marcello, a painter, and Rodolfo, a poet, attempting unsuccessfully to work in their freezing attic apartment. Rodolfo unselfishly sacrifices one of his manuscripts to provide some warmth. Colline, the philosopher, enters also complaining. It’s left to Schaunard, the musician of the group to save the day who arrives with food, firewood, wine and money.

When Schaunard suggests celebrating Christmas Eve at Café Momus, Rodolfo decides to stay behind with the promise to join the trio later. Moments later, Mimi (who perhaps doesn’t want to spend Christmas Eve alone) knocks on the door to ask Rodolfo to restore her candlelight.

It may be Puccini’s gloriously romantic music that has had Opera afficiandos enraptured at that much celebrated first meeting between Rodolfo and Mimi, while fascinating neophytes with the sheer speed at which the pair become inflamed with love. The American tenor simply mesmerized the audience with his first aria, Che gelida manina (What a cold little hand), displaying a lyric voice and articulate diction. Rhoslyn Jones responded beautifully with Si, mi chiamano Mimi (Yes, I’m called Mimì).

Ms Jones has previously sung Musetta, a role taken here by Marianne Fiset, herself a former Mimi. I sensed that both these excellent sopranos may have been better suited to their previous singing roles. Ms Jones seemed to be far too healthy-looking to be suffering from the late stages of consumption and her voice, though gorgeous, is a little too robust for Puccini’s fragile heroine. Ms Fiset on the other hand, appeared to be a rather demure Musetta. Though she did acquit herself well with a marvellously coquettish interpretation of her showpiece aria, Quando m'en vo (When I walk), teasing Marcello under the nose of Alcindoro her jealous admirer.

Alexander Dobson, who covered the role of Schaunard in the Vancouver Opera production of La Bohème three years ago, was a dashing and charismatic Marcello. His rich baritone made him a perfect match with Marianne Fiset’s Musetta.

The lesser roles were more than ably filled by bass baritones Alexandre Sylvestre and Giles Tomkins as Schaunard and Colline respectively. Baritone Doug MacNaughton certainly made the most of his two roles: an unusually benevolent Benoît, the landlord, he was also an amusing Alcindoro, Musetta’s sugar-daddy.

Maestro Timothy Vernon offers a spirited reading of Puccini’s evocative score, providing a musical anchor while allowing the singers some leeway for personal interpretation. Members of the Victoria Children’s Choir, who play Christmas revelers, received deserved applause when taking their bow at the end of the second act.

For their third production of the current season, Pacific Opera, under the guidance of first time director Michael Shamata, delivers a sure crowd-pleaser that showed a passionate commitment to the music and the tragedy of unrequited love. Hardly surprising that La Bohéme is the fastest selling production in POV's history.