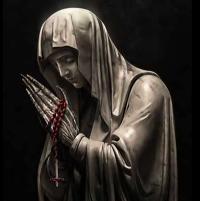 “Where God builds a church, the Devil will build a chapel” this paraphrased quote from sixteenth century theologian Martin Luther is heard at least twice through the film and in some way provides the sub-text for Evan Spiliotopoulos’ pseudo-religious supernatural film.

The film, though not really the story, opens in Banfield, Massachusetts in 1845. There is a brutal kind of exorcism taking place as seen through the eyes of “Mary,” the alleged “possessed” with a metal mask fixed to the face. Fast forward to the present day in the same Massachusetts town. Gerry Fenn (Jeffrey Dean Morgan), an opportunistic and cynical photo-journalist unearths a doll tied-up in chains inside a dead tree. Fenn has a reputation for having a convenient relationship with the truth, so when he discovers a young hearing-impaired girl wandering in the middle of the night he follows her. Alice (Cricket Brown) a young hearing-impaired girl appears to have some psychological connection to this dead tree.

When Alice, who incidentally is the niece of local pastor Father Hagen, begins to hear and speak, Fenn believes he might just be onto a good story. When Alice insists that she hears the voice of the Virgin Mary and gains the ability to cure the sick and the crippled, the denizens are eager to claim Alice a miracle-worker. Only the judicious Father Hagen, Gerry Fenn and Natalie Gates a local doctor are skeptical of what outwardly appears to be a Marian phenomenon.

The film works best when it attempts to avoid being a horror flick altogether, but instead delves into the practice of institutionalizing spiritual phenomena. The film might also be seen as redemption tale – of sorts. Jeffrey Dean Morgan is convincing enough in the (somewhat underwritten) role of the repentant tabloid journalist. Watch out Cary Elwes in an unusual (for him) role of a bishop with questionable moral authority.