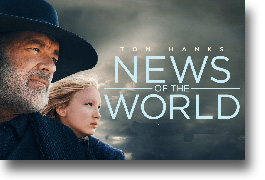 News of the World

News of the World is a Paul Greengrass’ film adapted from former Toronto, Ontario resident Paulette Jiles’ 2016 novel of the same name. It’s a curious title for an allegorical Western that serves as a kind of parable for our “unprecedented times.”

The story revolves around two misplaced souls drawn together in the aftermath of the American Civil War that continues to arouse ill-feelings on both sides. Tom Hanks is Captain Jefferson Kidd, a former infantry captain in the Confederate Army, who now works as an independent newscaster to any group of citizens who have a dime each and the time to listen. Twelve year old German actor Helena Zengel is Joanna, an orphaned child, roughly the same age as Zengel, adopted by the Kiowa tribe of Native Americans.

Joanna speaks no English and Kidd is unable to speak the language of the Kiowa. There are two things that this solitary traveler doesn’t need when he reluctantly takes on the chore of taking the rebellious child to her only known kin – a sullen travelling companion and trouble on the road – he gets both.

A grey-bearded Hanks delivers a typically weighty performance as a soldier who has found himself on the wrong side of the war. He generously allows (even helps) his co-star to steal nearly all the scenes they share. Helena Zengel turns in a smart performance that shows far more maturity than her years without having to speak more than a few words in English, though does a credible job of speaking the Kiowa Native language.

Watch for a marvelous cameo from Elizabeth Marvel as sympathetic inn-keeper Ella Garnett. Try not to miss singer-songwriter Mare Winningham's scenes, whose time on screen is far too short.

The filmmaker and his main actors once again prove there is still an audience for a good Western.