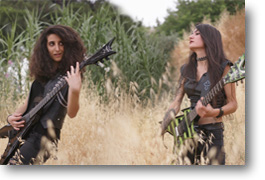 In Lebanese and English with English subtitles

Los Angeles based Moroccan-American filmmaker Rita Baghdadi’s latest venture is a rockumentary about Lebanese all-female metal band Slave to Sirens – likely the first ever in the complex Middle East region. What makes this film different from other profiles of female music groups is the band’s lead guitarist Shery Bechara and rhythm guitarist Lilas Mayassi. Baghdadi’s engaging work had its premiere at this year’s Sundance Film Festival.

The film opens with its unlikely subjects Bechara and Mayassi, not only as the band’s creative force but also lovers. A relationship that, at times, threatens the very existence of the group. There is so much drama between these two that the musical harmony is disrupted by the emotional harmony. The film owes much of its relevance to their chemistry and the director’s intimate access to their personal lives.

Baghadi intersperses her main theme with footage of public protests and anti-government rallies on Beirut streets. While the film’s primary focus is on the band’s mercurial duo, it doesn’t entirely overlook their bandmates: vocalist Maya Khairallah, bassist Alma Doumani and drummer Tatyana Boughaba. Khairallah, in particular, demonstrates her prowess as the band’s front-woman with her raw vocal power.

My only real gripe with this film was that, in the one hour and twenty minute length, I would have preferred more live music performance. Beyond the band’s disappointing show in front of a tiny audience at a poorly scheduled morning slot at the famous Glastonbury Festival and a twenty-second clip of Bechara and Mayassi performing Led Zeppelin’s Kashmir with a full classical orchestra, there was too little to indicate just how well these musicians can play. 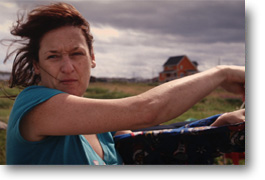 In regional English with subtitles

Dropstones is a simple, yet personal portrayal of Sonya Foley and her two young sons Sean and Luke (Walbourne) as they return to their roots on Fogo Island. Fogo is an island off the Northern coast of the Island Province of Newfoundland, roughly 25 kilometres east of Twillingate – an area known as Iceberg Alley.

Fogo Island has a long maritime history. Its bright-colored clapboard houses and sea-cliff footpaths are regularly featured in television travel commercials. It’s possible that even some Canadians knew little about Fogo Island until 60 Minutes, an American television magazine program aired an episode titled “Fogo Island: A far away comeback story.”

For Sonya, Sean, Luke and Sonya’s new partner Daniel Tobin, Fogo isn’t just a place where they happen to live, but more a way of life. Caitlin Durlak follows the family over the course of a year, through a short summer and a long winter, illustrating both the rigors and the serenity of island life.

It’s a little unusual for a film to provide English subtitles for an English language film, but for anyone unfamiliar with a prominent Newfoundland accent, these subtitles will certainly help through it. 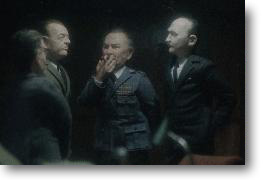 In Polish with English subtitles

1970 is Tomasz Wolski’s gritty documentary that serves as a stark reminder of what life in Poland was like under the Polish United Workers' Party (Poland’s version of the Communist Party). Shot almost entirely in black and white video footage in 4.3 aspect ratio. There is no audio narrative or voice-over. However, Wolski does use and interesting device that has actual recorded telephone conversations and miscellaneous dialogue visualized through “claymation” or stop-motion animation.

For one week in December, 1970, four Polish cities along the Baltic coastline: Gdansk, Gdynia, Elblag, Szczecin witnessed public demonstrations and worker’s strikes in protest against extreme price increases. The objective of protests was socio-economic, not political. Nonetheless, the riots stimulated a political awareness that had been dormant among Polish workers. The situation became very tense, very quickly and so a group of politicos got together in Warsaw to devise a stratagem to put down the uprising with the approval of USSR General Secretary Leonid Brezhnev. Watching this film, one cannot resist drawing comparisons between then and Russia’s current interference in Ukraine.

While the protest was defeated this time, Poland only had to wait another ten years before shipyard electrician Lech Walesa brought the Solidarity movement to the people. 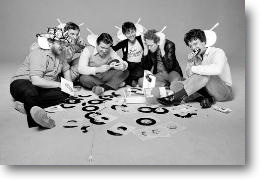 Doug and the Slugs and Me

Growing up in East Vancouver, filmmaker Teresa Alfeld just happened to live next door to Doug Bennett and his family. As a close friend of Bennett’s daughter Shea, she was constantly in and out of the Bennett household. Anyone living outside Western Canada could be forgiven for not knowing Doug Bennett. Well, despite being front man Canadian club band Doug and the Slugs, he was an unlikely rock star. As one of his former band-mates remarked in the film, “With his slicked back hair and familiar dress shirt and necktie, he looked more like a second-hand car salesman.”

Bennett had a pleasant voice with a narrow range, but he did have a strong sense of what a fun radio single should sound like. Such songs as "Too Bad" "Day By Day" and "Making It Work" all made Doug and the Slugs the band to go and see live during the eighties.

Teresa Alfeld brings together well known musicians, industry insiders and former “Slugs” who contribute much to the documentarian’s storytelling. It turns out that Bob Geldof (of Live-Aid fame) and Bennett were journalists at the Georgia Straight TM together. Bif Naked, Steven Page, Ron Sexsmith, Terry David Mulligan and the band’s former publicist Denise Donlon also recount their experiences in interviews conducted by filmmaker.

In going through Bennett’s many hand-written journals dated from 1979 up to the early nineties, Alfeld learned that the next-door-neighbour from her childhood was a far more complex individual than the best friend’s goofy dad she remembered.

Vancouverites will find special interest in revisiting the local club scenes from the subject’s heyday. Doug Bennett died in Calgary in October 2004, a few days before his fifty-third birthday. A journalist with the Vancouver Sun noted at the time: “there were many Slugs, but only one Doug.”

Footnote: Denise Donlon is a member of the Canadian Broadcasters Hall of Fame and is married to Murray McLauchlan. 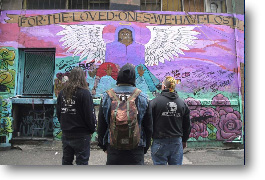 Love in the Time of Fentanyl

Love in the Time of Fentanyl is a non-linear documentary that focuses on the working class heroes who volunteers much of their time at the Overdose Prevention Society on Columbia Street in Vancouver’s Downtown Eastside. The site operates supervised injections with clean equipment and monitored doses.

Just fifteen minutes walk from where luxury cruise ships dock at the port of Vancouver, the neighborhood has generally been referred to as ground zero for the opioid crisis. While a disproportionate number of the centre’s clientele are on the margins of society, there are those who find themselves addicted through a mix of unfortunate circumstances such as suffering from PTSD or the loss of a spouse.

While well intentioned, Colin Askey’s film lacks cohesion and the pacing is particularly uneven. Over the course of eighty-five minutes (which may be fifteen minutes too long) the film meanders between locations and strays from one subject’s story to another, without any satisfactory conclusion.

To the film’s credit, however, it illuminates the selfless courage of those, many former addicts themselves, who provide a safe way to consume. Despite the fact that so many have died through fentanyl overdose, no one has ever died from a drug administered at the safe injection sites. 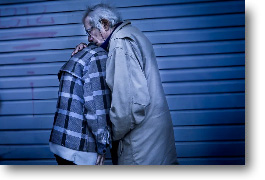 Hayes’s film follows a linear format, combining animation and live action – set mainly in the Montreal neighbourhood where the couple lived with their daughter on the autism spectrum. Before being diagnosed with Alzheimer’s disease, Audrey Schirmer had a stellar career as a photographic journalist and even directed an anti-war documentary along with her husband. She died in hospice care, surrounded by family in late December, 2019 at age 77.

The film reveals Duckworth’s marriage to Audrey Schirmer was his third attempt at marital bliss. His first wife, Helsinki-born Satu became so depressed and home-sick, she attempted suicide. Identical twin daughters Marya and Sylvia from his marriage with Satu are seen in earlier video footage. He met Audrey while still married to his second wife, Swedish actress Marianna Rydvald. In one of the film’s animation sequences, we see Duckworth ruminating atop Machu Picchu about who best his future lies with.