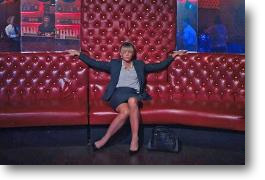 This is the story of a woman who is tired of the hypocrisy, the low-key abuse, and the outright danger of a deeply, insidiously patriarchal society. To reconcile her grief over a close friend’s as yet undefined trauma, Cassie (Carey Mulligan) drops out of med school and spends her nights pretending to be a vulnerable extremely drunk female, appearing on the outside to be very unambiguously not in full consensual control, then allowing ill-intentioned men to bring her home. When they inevitably take advantage of herpresumably incoherent state, she turns into a hard, sharp sober and proceeds to teach them a lesson.

In her directorial debut, writer Emerald Fennell intrigues with an extremely well written film that delivers perfectly in our current social climate. Promising Young Women is a hard, edgy-but-accurate depiction of a wide array of horrors that women are subjected to all too frequently. From more covert abuses (Alison Brie plays Madison, a smug ex med school classmate who wants to know if Cassie has had children yet, and the patronizing “well there’s still time” reaction), all the way to more sinister sexual encounters (Adam Brody’s “nice guy” Gilmore Girls persona takes a fast turn), Mulligan handles each encounter with enviable audacity and razor-sharp words that most women would dream of having the confidence to pull off.

Mulligan’s portrayal of Cassie, a 30-year-old med school drop-out, is reminiscent of such revenge heroines as Thurman’s Beatrix Kiddo of Kill Bill, or Fennell’s own previous writing work in TV’s Killing Eve. But beyond the trappings of dark comedy suspense thriller, Promising Young Woman is more than social commentary dressed up as a classic revenge fantasy. Mulligan is complex and intense without becoming campy. Shot in just 23 days, Benjamin Kracun (director of photography) and Fennell worked on a vision together with richly shot 70’s esthetic with bright colourations to bring out the set. Its almost Art Nouveau style creates a surreal dream-like quality that makes you doubt the film’s dark and twisty ending is even real.

Unlike the Variety reviewer that included amongst his commentaries an observation on Mulligan’s looks, to the effect that Margot Robbie may have been a better fit, I hope other viewers will appreciate this darkly provocative thriller for all its layers, and like for me, it may leave you with plenty of ideas to unpack and think about for a while. Fennell’s exceptional writing and directing deserves the multiple award nominations as well as Critic’s Choice Award for Best Original Screenplay.