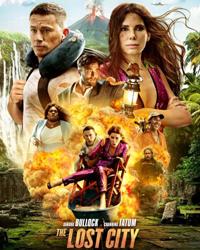 Adam Nee borrows much from Robert Zemeckis’ 1984 film Romancing the Stone for his own action-adventure romantic comedy The Lost City. After all it includes the requisite elements of a romance novelist finding herself in the middle of a dangerous adventure hunting for treasure and being rescued by a mercenary rogue. Set mostly in the Dominion Republic, Adam Nee’s film shows how much cinematography and special effects have advanced since the mid-eighties.

Loretta Sage (Sandra Bullock) is a recently widowed, novelist who writes popular fiction centred on a fictional hero named Dash, who is portrayed by her attractive, but agrestic cover model Alan Caprison (Channing Tatum). While on a promotional book tour with Alan, Loretta is kidnapped in a fuchsia sparkly jumpsuit by an eccentric billionaire who believes the location of a lost city in hidden in the pages Loretta's book.

Sandra Bullock manages to recycle her physical comedy schtick from Miss Congeniality and put it on full display in The Lost City. Daniel Radcliffe (remember Harry Potter) delivers a cartoonish portrayal of the evil genius Abigail Fairfax. Da'Vine Joy Randolph steals all the scenes she is in as Loretta’s dynamic manager Beth. What Channing Tatum lacks in acting chops, he more than makes up for in this film in screen presence. Watch for Brad Pitt in a cameo role as over-the-top elite mercenary.

The film is not so much about finding a lost treasure in some exotic location, but finding the treasure that already exists in your own life.