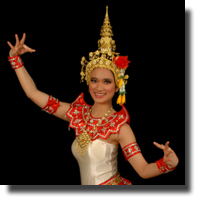 WannaKhadee – Stories from Siam was a unique and captivating dance performance that brought the visual artistry and ritual of Thai traditional dance to Vancouver audiences. Artistic director Pimchanok Megara Solloway, created an ensemble of five talented dancers to bring to the stage a dance evening that was rich in symbolism, meaning and colorful Thai dress.

The program featured six separate pieces each depicting a story from Thai folklore. These included the Epic Tale of Ramakien; Budsaba’s Prayer; A Sacrificial Dance; Sung Thong – which is about a daughter choosing her groom by tossing a garland of flowers to a handsome young man in disguise; The Abduction of Suwanmali; and Nang Noppamaad which is about the beautiful Loy Krathong festival held annually on the full moon in November.

What was unique about the performance was the focus solely on the dancer and shimmering costumes without the need of lavish sets and lighting. The Thai dance costumes, with their bright silk colors and shining glitter are brilliant adornments that render additional set design unnecessary.

The dancers included the artistic director Megara, who moves with a grace that epitomizes classical Thai dance; the male dancer Sarana, who was the narrator and also appeared in a sword fighting duo with a female warrior and lost. The dancer Tacky represented a strong, fierce male role and wore a mask that was designed to intimidate opponents. He portrayed the warrior, Hannuman in the Usaren Army.

Kady T is a talented, emotive dancer who was trained in Thai dance and music. Jennie Suwaponn is the youngest member of the dance company and was trained in traditional and folk dance. She dances with beauty and precision.

The Richmond, B.C., Thai Dance Company was founded by Megara in 2008. The company offers a range of dances with choreography originating from the Royal Court of ancient Siam. Judging from the enthusiastic response of the capacity audience in attendance, a solid fan base appears certain for this captivating company of Thai dancers.