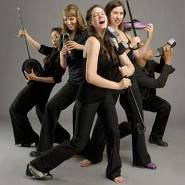 2011 Vancouver International Tap Dance Festival
A.C.G.I. (Anybody Can Get It) + an interview with Jason Samuels Smith

The incredibly talented choreographer and tap dancer Jason Samuels Smith dazzled a sellout Vancouver Playhouse Theatre audience with his company, A.C.G.I. (Anybody Can Get It). Smith, based in New York, has been a tap superstar for years and mentored by no less than the legendary dancer, Gregory Hines. Smith won a 2009 Dance Magazine Award and an Emmy and American Choreography Award for the Jerry Lewis / MDA Telethon Opening.

A.C.G.I. tours the world and is composed of the talents of several star tap performers. Chloe Arnold, a former student of Smith, is the co-director of the LA Tap Festival and was featured on the cover of Dance Teacher Magazine. Melinda Sullivan is from Los Angeles and appeared as a finalist in season seven of “So You Think You Can Dance”. Sarah Reich is the artistic director of the tap dance company Tap Con Sabor! and worked for six years with Tap legend Harold Cromer.

The energetic and stylish Lee Howard, known affectionately in tap circles as ‘Lee How’ is a Chicago native who was featured on the cover of Dance Spirit Magazine. He is also a creative hip hop music artist.
Tap fans apparently like to be ‘ in the groove ’ and Smith opened the evening by telling the audience to let their hair down and ‘let us know’ when they like something or not. That set the tone for a spirited evening of audience enjoyment and grooving to the music that was refreshing and uninhibited.

What followed was a series of group and solo performances that dazzled the audience with fast, rhythmic and poetic footwork and turned a constrained Vancouver audience into an exuberant, expressive crowd of tap aficionados. One does not just attend an A.C.G. I. performance, one feels part of it. This is the magic of Smith and his company.

There were several highlights in the evening performance. Lee’s solo performance was brilliant and captivating and included a fine rap song that energized the crowd. His ability to tap while spinning in a circle is exciting to watch. Smith produced an astounding solo of fast, rhythmic moves that was delightfully hypnotic and leaves one wondering where all the energy comes. Tap dancers are famous for going the distance. Chloe Arnold, bathed in a shimmering spotlight, presented a soulful and beautiful solo that enthralled the audience. She has natural star quality and a stage presence that an audience can feel.

Kudos also go to the superb musical trio of Theo Hill on piano, Buff Allen on bass guitar and Kerry Galloway on drums who kept the right tone of music to support and not overpower the delicate sound of tap. Upon the close of the performance, the audience eagerly gave A.C.G.I. a standing ovation to which Smith playfully replied, “Either you liked it or you are ready to go home.”

Fortunately, the performance was not yet over as the company had the juice to give two wonderful encores.
Great tap dance is a rare event in Vancouver. The stellar performance by Smith and his company will certainly keep the A.C.G.I. welcome sign lit at the Playhouse for many years to come.

An interview with Michael Pink

The famed tap dance company ACGI (Anybody Can Get It) dazzled Vancouver audiences at the Vancouver Playhouse Theatre on September 2nd. Artistic director and star Jason Samuel Smith was gracious enough to sit down with Review Vancouver after the show to talk about his company and his life as a tap dancer.

“You know my parents were both dance teachers” recalled Smith fondly, “my Mom taught jazz and I would wait for her outside the classroom. My sister also took tap and I loved it. Tap dance spoke to me because it has a great gift of rhythm.” In any human pursuit it is always invaluable to have a mentor and Smith was blessed to have one of the best- the great tap dance legend, Gregory Hines who sadly passed away in 2003 at the age of 57. “Hines was a big influence” remembers Smith, “Professionally he set high standards in dance, music and acting.” Many will recall the great 1985 dance film ‘White Nights’ starring Gregory Hines and ballet superstar Mikhail Baryshnikov. “I first met Hines when I was doing an episode of Sesame Street years ago” says Smith, “he was a star but a regular guy.”

“In 2001 in L.A. I had this dance studio and all kinds of people would drop by to dance and experiment. Word must have got around because one day Hines walks in. Then everyone came. A highlight of my life was dancing with Gregory on Broadway.” Smith was honored to receive the Gregory Hines Humanitarian Award in 2005.

Professionally, the first big break for Smith came when he was in the show, Bringing the Voice, Bringing the Funk which starred tap sensation, Savion Glover. “Our group ACGI has been dancing together for ten years. All the cast were former students of mine. I started teaching at the age of sixteen. Teaching is sharing information. Now I’m learning how to be a better teacher.”

“As a tap dancer, we are constantly dancing and practicing. Stamina is important. We try to build stamina but keep clarity. There are no shortcuts in tap.” Luckily for tap lovers, Jason Samuels Smith has beautifully refined the art of tap and has the stamina to carry on delighting and dazzling fans worldwide.