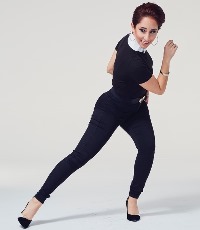 Tipped in the introduction by Sas Selfjord (Executive Director, Vancouver Tap Dance Society) as “…one to make you cry…” (in the best way), this performance was the perfect ending to the 2018 Vancouver International Tap Dance Festival. Emotions were high on stage as the dancers interspersed tap dance with hyper-personal storytelling - sharing fond memories of their dance mentors.

The show’s director, world-renowned Ontario-based dancer Travis Knights was first to perform and set the tone by mixing acapella tap with spoken word. A true entertainer, Knights continued in his second solo to speak to the audience and tap simultaneously, weaving the story of how his extreme shyness as a child led him to the world of dance and the female teachers that were his dance mentors.

Multi-talented tap ambassador and former Syncopated Ladies dancer Sarah Reich performed two outstanding original pieces during the show. In the first she shared a humorous anecdote about her tap mentor, the legendary Vaudeville performer Harold “Stumpy” Cromer, followed by a heartfelt solo dedicated to him, choreographed to the song “Mr. Bojangles.” In Reich’s second solo, titled “New Change” after her upcoming album, her strength in rhythm truly shined through. The piece was amazingly energetic to watch, and received a standing ovation.

Canada has some amazing home-grown leaders in the world of tap dance and it was a pleasure to witness Canadians Matt Shields and Heather Cornell interact on stage. Cornell was Shield’s dance mentor as a child and he paid tribute to her in a sincere Texan-flavoured solo, which was also a shout-out to his current hometown.

The biggest tribute of the night was Cornell’s classic routine “Gumbo Hump” performed by the full troupe. The music for “Gumbo Hump” was written specifically for Cornell by her mentor, the renowned bassist Ray Brown, and she was the only tap dancer for whom he acted as a musical mentor. It was a delight to see this definitive work performed live by these tap superstars.

It was truly emotional to see how each performer was so connected to their memories and mentors, and prompted me to reminisce about my own dance history.