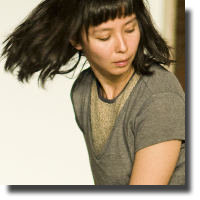 With Ame Henderson’s experimental, non-linear dance work, the title Relay is both a noun and a verb. It explores the psychology of togetherness, yet allows for individual self expression in performance. And while Henderson’s fascinating-to-watch choreography seems to lack any structured vocabulary, the dancer’s movements are profuse with purpose. A further contradiction is that while the work’s core form is unison it is completely remote from precise dance syntax.

The audience is allowed in to the theatre space only ten minutes prior to the performance and are directed to enter via the stage within Trevor Schwellnus’s white box set and a large folding table that displays an assortment of outdated electronics and kitchenware – much like a communal garage sale. Henderson then subjects her audience to the mildly entertaining gambit of having embedded performers wander among the audience with Tai Chi-like movements and closed eyes.

If the ploy’s aim was to remove the invisible barrier between patron and performer and even encourage collusion, it was only partly successful. The audience in general was unsure quite how to react to the interaction.

The seven members (Three men and four women) of the group, who are collectively on stage for the roughly seventy-minute performance, could hardly be less similar in appearance, style and athletic prowess - no doubt a deliberate element in Henderson’s audacious incongruity in pursuing a central theme of unity actualized by a divergent corps.

The essentially esoteric choreography is set to Eric Chenaux and Eric Craven’s original pre-recorded score modulated and looped through an amplifier. The basic score though, is embellished by Chenaux’s on-stage creative tinkering with a transducer and the knick-knacks displayed on the table at the beginning of the performance. At times, the phlegmatic Chenaux almost appears to be part of the dance performance – involved, yet uninvolved.

According to the programme, Cathia Pagotto is credited with costumes, which is pretty much “come-as-you-are” in predominantly earth tones. One senses that the performers clothing would change nightly.

Ame Henderson certainly challenges her audience to comprehend her interpretation of harmony without conformity. The performance ends with the entire cast, each with one hand on a single camera taking a photograph of the audience. Perhaps we are all in this together.