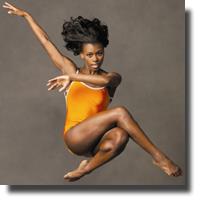 In the dance world there are many fine performances but what the Alvin Ailey American Dance Theater offers is an event – a tour de force of ballet that leaves audiences excited and awed. Alvin Ailey, born in Texas in 1931, was a dancer and creator with a vision. His vision was to celebrate through dance the uniqueness of the African American cultural experience.

It has been said that ‘ the mighty oak tree sleeps in the acorn’ and so it was with the Alvin Ailey American Dance Theater which started from quiet, humble beginnings with a small performance in March 1958 at the 92nd street YMCA in New York. Today, AAADT has performed for 23 million people in 48 U.S. states and 71 countries. The company has been designated a ‘vital American cultural ambassador to the world ‘ by the U.S. Congress.

Judith Jamieson, a former dancer, close Ailey friend and creative dance force has been the Artistic Director since 1969 when appointed by Ailey himself. The performance program featured a colorful, rhythmic and fast paced collection of works that were captivating. With every great performance there are no dull or repetitive moments, only a surge of ever expanding creative invention that leaves the audience at the peak of artistic enjoyment.

The evening opened with a short and fascinating biographical film account of Alvin Ailey and the life of the company. This was an important introduction since AAADT is not only a dance experience but an important cultural one as well – and this is one of the secrets to the rich cultural and audience success of the company.

The program opened with Memoria (1979) choreographed by Ailey and featuring the entire 18 member company. Then came the electrifying Cry (1971) choreographed by Ailey and dedicated to Black women everywhere. The piece was performed with soaring emotion and technical grace by Rachael McLaren who hails from Winnipeg, Constance Stamatiou and Briana Reed. McLaren personifies beauty in motion with her elegant and confidant movement.

The Hunt, (2001) was choreographed by Robert Battle who is the artistic director designate of the company. This evocative, lively and earthy work is a dance spectacle that brings forth the best of modern dance. The six male dancers: Clifton Brown, Antonio Douthit, Yannick Lebrun, Kirven James Boyd, Glenn Allen Sims and Jamar Roberts dance with power, strength and yet maintain the beauty of movement that is essential to captivating ballet.

The Hunt has powerful tribal overtones that evoke deep emotions that are enhanced by a musical score featuring “Jungle Jazz” by L. Blomme and music by Les Tambours du Bronx. Antonio Douthit, who was born in St. Louis, is a particularly impressive, beautiful and energetic dancer to watch. Douthit embodies the boundless energy and technical mastery from which all great dancers spring.

The signature piece of the evening was the masterpiece, Revelations choreographed by Ailey in 1960. The tour de force work featuring several dance pieces is a cultural, ballet and musical walk through the African-American cultural experience. The performances by different company members and at times the whole company was brilliant and masterful. Dance is not just seen with the Alvin Ailey dancers but more importantly - felt. Particular standouts were Yannick Lebrun; Glenn Allen Sims, Olivia Bowman Jackson; Hope Boykin, Amos J. Machanic, Jr.; Linda Celeste Sims and Renee Robinson.

The final piece, Rocka My Soul in the Bosom of Abraham featured the entire company. The music was adapted and arranged by Howard A. Roberts. This hyper- energetic and fun piece had the dancer’s truly exuding joy as they moved and engaged the entire audience who clapped enthusiastically.

For AAADT, this is the first appearance in Vancouver in a generation and brought a rich appreciation to the audience of the rich cultural roots and spectacular dance that makes the company deserving of its shining fame.

The illustrious 'Alvin Ailey American Dance Theater' makes a much heralded visit to Vancouver in March for an evening of modern ballet that promises to shine with artistic brilliance. Two of the dancers to watch are the dynamic Antonio Douthit and the elegant Rachael McClaren who was raised in Winnipeg. reviewVancouver caught up with the dancers recently for interviews to learn more about their dance world and the amazing Alvin Ailey experience.

MP: Tell us about your early life and dance training.
AD: My childhood was not always easy. I lived in a shelter for a short time at Hope House with my mother. I didn’t play sports but was always active in the neighbourhood and loved to play in the park. One day while hanging out with friends I walked by a classroom where they were teaching dance. The teacher invited me to come and I went the next day and loved the movement.
MP: You describe COCA (Center of Contemporary Arts) in St. Louis where you grew up as a turning point in your life and dance.
AD: Absolutely. One of the teachers saw some talent and took me to COCA to meet Lee Nolting who was a mentor and inspiration. She is an amazing lady and teacher. She believed in me and arranged a full scholarship at COCA.
MP: What was it like to suddenly be in a major dance school?
AD: Going to COCA was a little scary at first. At sixteen I took master dance classes, I had to learn everything and basically catch up to dancers who had been training for years.
MP: tell us about your first experience with Alvin Ailey.
AD: When I was sixteen, Alvin Ailey did a dance show at the Fox Theatre and I went so see them perform their signature piece, Revelations. This was the first time to see a professional dance performance. It was extraordinary. Then I knew I had to be a dancer. To dance one day with Alvin Ailey became my dream.
MP: This was a transformative experience for you.
AD: Totally. I knew I wanted to be a part of this. It took control of my life. Dance became a purpose.
MP: Tell us about your life now with Alvin Ailey.
AD: Our company is unique. Judith Jamieson, (the artistic director) is an awesome woman. Being in the room with her is incredible because of her spirit for dance and teaching. We are on the road several months a year and do a five week run in New York each year. As a dancer, we do training generally from noon to 7pm Monday to Friday. We will have a class before every performance to be warmed up.
MP: Dancers often deal with injury and pushing physical boundaries.
AD: It is true. We can be in so much pain before the show but the magic of dance is that once the curtain goes up the adrenalin flows and it feels great.
MP: You have talked about the many people who helped your career and dream.
AD: Sometimes as a kid you don’t realize at the time all the help you are getting, the lunches, the rides, the equipment. I had more than a village to help me and feel very appreciative. When my Mother saw me dance at COCA, she was overjoyed and cried. It made me realize that I was doing something worthwhile. When you touch someone it makes you feel special.
MP: Can you give us your personal reflections on being a dancer. You also have a popular video out called, ‘I Am a Dancer’ that is a touching portrait of you and your dance.
AD: Dance is fuel for the soul. I would feel lost without dance. When I found dance, I found myself. This is my career. I have come to a place where I want to take the audience into the world of dance.

MP: Tell us about your early dance training.
RM: Winnipeg is where I grew up and my dance training started at age five. As I danced, the passion for dance grew. All I remember when young is watching ballroom dancing and gymnastics and loved anything with movement and expression. I also loved music. It spoke to me. Ballet is special and always connected with me.
MP: How was your experience at the Royal Winnipeg Ballet School as a young student.
RM: I always wanted to learn. It was very competitive but I loved it. I went to train with the Royal Winnipeg Ballet company school general division. Jackie Davidson was my mentor and teacher and Evelyn Hart was an inspiration.
MP: What was your artistic path to Alvin Ailey in New York?
RM: Jackie suggested the Alvin Ailey School when I was in high school, about 16 years old. I auditioned for Julliard and in Boston. I was accepted at the Alvin Ailey School after auditioning and started training at the school at 17. It was amazing to be around all these dancers. It was like being exposed to all these great foreign languages.
MP: How your experience at Alvin Ailey 2, the junior performing company?
RM: I joined at nineteen. The school is a stepping stone to other companies. It was established by Alvin Ailey in 1974 for young dancers. You tour nationally and internationally. It is typically a two year posting for dancers. It was a huge experience.
MP: It appears that you are the first Canadian dancer to be in Alvin Ailey.
RM: That’s true. There was another dancer in Ailey 2 who was Canadian but to my knowledge, I am the first one to be in the Alvin Ailey Company, which I joined in 2008.
MP: You will be dancing a solo in Cry, choreographed by Ailey in 1971.
RM: This is a heart wrenching, empowering piece for mothers everywhere. The solo was written for Judith Jamieson who was close to Ailey. It is usually a solo work but with this tour we use different dancers doing the piece in three different solos.
MP: What is your vision of dance?
RM: For me, dance has ignited my passion for life. Dance is about sharing and teaching. The energy of dance is special.