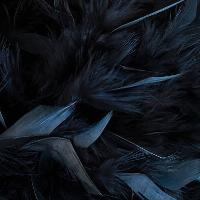 When and Where April 29 - 30, 2022, 8pm | Blue Shore Centre for the Performing Arts, Capilano University, North Vancouver

The Lamondance Company presented a riveting program on opening night with Black Feather. Artistic director, Davi Rodrigues explained the motivations for his writing saying it was inspired by the election in Brazil, his home country, in 2018. It got him thinking about our ability to give people power and when we do, how is that power used and how do we respond to the results. The black swan in the program symbolizes that power.

In Black Feather it is a dark power which is emphasized to dramatic effect by Brad Trenaman’s lighting design featuring shadows, filtered video projections and smoke infused light. The dancers are up to the challenge of imparting the emotions that come from the inevitable struggle with oppression that misuse of power brings. Their patterned body suits showed the tension in their movement and the control they wielded while moving within the blocks of choreography that Rodrigues designed. Many movements were gymnastic in nature, requiring exact timing while dancing in close proximity to each other.

It was hypnotic to watch the bird like movement of many sequences and the symmetry that the dancers achieved in their larger group patterns. The music which accompanied each segment perfectly accentuated the scene, the dancers seemed to meld into the rhythm of the music. Rodrigues has a knack for choosing the perfect accompaniment to each segment which enhances the overall effect of the program and inspires the dancers in their work. Black Feather is hypnotic, riveting dance/theatre.

The audience was also treated to a preview of Skin Within which is premiering on June 3rd and 4th at the Blue Shore Centre for the Performing Arts. Behind the Veil, an excerpt from this new program is choreographed by Davi Rodrigues with music by DJ Mayhem and Radical Face. This show features performers in the Lamondance training program. The opening set was very fast paced and utilized movement reflective of ice dancing and gymnastics. The humour component involving clothing and the smiles on the dancer’s faces were a delight. Something to look forward to in June.

Black Feather showcases the achievements in dance that Lamondance is bringing to the North Shore and beyond.