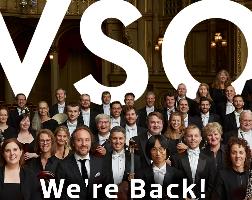 The Beethoven Experience: Beethoven the Modernist concert on March 7, 2020 was the last VSO concert on the Orpheum stage that the public were able to attend. That is until this weekend (September 18 & 19) when the Orchestra welcomed back Vancouver music lovers to their Gala Opening concert. Since the 2019-2020 “Live” season ended part way through BeethovenFest, it was perhaps fitting that Maestro Otto Tausk opened with a Beethoven overture from his only opera Fidelio.

From the opening bars of Beethoven’s showpiece overture, one senses that this work is one that befits a grand occasion that happens just once in a while. Of course, as Maestro Tausk mentioned, the musicians haven’t been idle – they just haven’t been there (on the Orpheum stage. So, predictably, the orchestra showed no sign of rustiness and the audience was thrilled to be back in concert hall seats.

Hector Berlioz’s Un Bal from his wonderful Symphonie Fantastique required the placement of two harps at the front of stage. The symphony is partly autobiographical and is an excellent example of a thematic concept in music. The VSO sounded very heroic throughout, demonstrating overall balance between dual harps, woodwinds and strings.

Jules Massenet’s Meditation from the opera Thaïs featured Nicholas Wright on violin and Alyssa Katahara on harp. The melancholic Meditation serves as an intermezzo between scenes during the second act. The early duet from Mr. Wright and Ms. Katahara allows the audience to withdraw, for a few moments, from the world outside.

Ontario indigenous composer Barbara Assiginaak’s Innenohr (Inner Ear) was commissioned by the Toronto Symphony Orchestra and was initially intended to complement Beethoven’s second symphony. We certainly hear deliberate fragments of the German composer’s signature and despite its abstract motif, there are passages that are surprisingly melodic.

Antonin Dvorák’s Slavonic Dances Opus 72, (No. 2 in E minor and No. 7 in C major) was selected to bring the curtain down on the first half. The rousing opening of the popular No.7 makes quite an impression and as it progressed I found it difficult to keep my feet still. Dvorák’s supple rhythm is fittingly articulated by Maestro Tausk.

The second half was dedicated entirely to Pyotr Ilyich Tchaikovsky’s Symphony No. 5 in E minor. And while nowhere near as popular with the public as his ballets, the symphony has stood the test of time. Opening with a quiet clarinet, it has a recurring main theme and is essentially scored for woodwinds. Although, in the final movement, the symphony’s cyclical structure employs all sections of the orchestra equally. Tausk underscores the powerful opening moments of the Finale, before opening up with brisk, vivacious passages.

Breaking with tradition, the VSO called upon indigenous leader Dennis Thomas to receive the audience with a land acknowledgement and welcome in the Sel?íl?witulh language. This was immediately followed up with Sri Lankan-born Dinuk Wijeratne’s boundary-crossing Yatra, which might best be described as a new age fanfare.