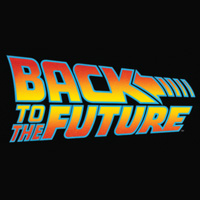 The Vancouver Symphony Orchestra
Back to the Future In Concert

Back to the Future (BTTF) is a 1985 American comedy film directed by Robert Zemeckis. It stars Burnaby-born Michael J. Fox as Marty McFly and Christopher Lloyd as his eccentric mentor Doc Brown. The story follows young Marty, who is accidentally transported back to 1955 in a time-traveling retrofitted DeLorean.

Alan Silvestri's thrilling score provides the linchpin for what is considered one of the best soundtracks for a non-musical film. The storyline pivots between the mid-fifties and the mid-eighties, so the music has to reflect both periods. Played end-to-end Silvestri's original score is around forty-five minutes long. Maestro Andrew Crust includes additional music to the performance that was not actually in the film – perhaps borrowed from the two sequels.

Crust appeared to enjoy leading the orchestra in this concert, initially abandoning his tuxedo for a McFly sleeveless puffer jacket. The breezy "The Power of Love" – the one written by Huey Lewis (not the Celine Dion version) has become a de facto theme for BTTF. We hear the orchestral arrangement as we watch Marty rushing to school on a skateboard cleverly tagging behind other vehicles for a free ride.

The recurring main theme is introduced with tense strings before brass is accompanied by low-pitched percussion, when Doc Brown’s dog Einstein is drafted into the DeLorean test run. The main theme gets pretty dramatic treatment for the first major action scene that involves a chase with the Libyan’s passenger van. The orchestra really takes over the film’s frantic score in the downtown skateboard chase – judging by the audience reaction – a definite highlight. Maestro Crust and the orchestra keep the tension waxing and waning in the nail-biting Clocktower scene with tense percussion adding drama playing through of the main motif.

There are parts in the film’s run where the live orchestra leaves it to the original soundtrack to provide the soundscape, particularly with the fifties pop songs like "Mr. Sandman" (bring me a dream). The orchestra does fill in with light strings to enhance The Starlighters’ rendition of "Earth Angel," written by Jesse Belvin and Gaynel Hodge.

Alan Silvestri’s Back to the Future score is an orchestral masterpiece – certainly one of the best ever written. It so easily merges with the narrative, that if you didn’t know there was a full orchestra on stage, you may not even notice it.