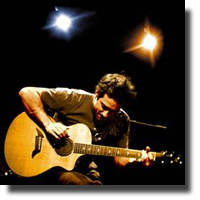 Located at Main and Alexander, the Ironworks is not a typical venue. Used primarily for film production and the occasional concert, it was a treat to see a show in a small venue unlike any other.

The evening’s music started with Vancouver-based synth texturalist, Colin Janz, who plays progressive pop music and has an incredible vocal talent that juxtaposes beautifully with his electronically infused music. Janz’s 45-minute set warmed up the Ironworks and the audience for the main show of the night. Providing a very different musical experience from Trace Bundy, the two performers were a complementary combination for an evening of music.

Bundy is equal parts musician and story teller. His anecdotal antecedents to each of his songs unified the audience through laughter; hanging off his every word as well as his every note. His stories went beyond the preamble between songs, and became interlaced with the music coming out of his fingertips and into the air. Laughing with him at himself and his stories, the audience became personally drawn into his performance – as he if was befriending each and every person in the room, rather than simply putting on a show.

The music ranged from golden oldies, contemporary classics, original pieces, and classical music. Bundy personalized each song with his own arrangement, rendering them unique in his own special way. He did a couple medleys that spanned from the 1950s to the early 1990s. In asking the audience to sing along, Bundy proved that the only words that people really knew in such classics as YMCA are “Young men.”

With at least four capos at any given time clipped on to his guitar like clothes pegs, Bundy often played musical capos, having as many as 5 on his fret board at one time, and often moving two or three around as the song demanded. On the rare occasion where Bundy ran out of his own fingers, his wife Becca, joined him on stage and shared both the spotlight and fret board. Looping and playing songs backwards, demonstrating his iphone prowess by doing an amazing Stevie Wonder cover, Bundy’s bag of tricks was surely far from exhausted during his hour and a half set at the Ironworks.

It’s a true shame that he only makes it to Vancouver once a year for a single show.