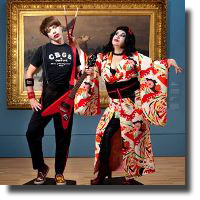 Die Roten Punkte (The Red Dots) are Berlin's Prince and Princess of Indie Rock. The almost full house on opening night explains why they've sold out shows just about everywhere.

The dysfunctional siblings Otto and Astrid Rot return to Vancouver (for the 5th time, according to Otto), and again they were a hit at The Cultch on opening night.

What makes them a hit? I think it's their energy and all-around talent. They sing, dance, clown around, get the audience involved...in short, they entertain with their energetic charisma.

"Punkte" I thought at first had something to do with "punk rock" because their music had some kind of dissonance and chaos resembling punk music. But this duo didn't have the confused melodies of punk. If it did, it was done on purpose.

But engaging the audience was what got the opening night audience going. They would often say "Danke, Vancouver" for our applause, and later go on to make us say ooohs and aaahs in unison.

I liked the lyrics of ICH BIN NICHT EIN ROBOTER (I AM A LION) which goes:

Young silver machine, ready for work
FedEx-ed to the jungle by a lazy clerk
Instead of living in Detroit putting on tyres
He put his head out the box
He was surrounded by lions

Ich bin nicht ein Roboter
I am a lion
Raar

I also liked their mini-rock opera, the longest song in their repertoire,THE 4:15 TO SPANDAU WILL NOT RUN TODAY, which tells the story of the Berlin wall coming down. It starts off...

Early misty morning
November morning
A house in the woods
And the rain is falling on the house
And a big black crow feeds on a mouse....

The "Banana House" song was also enjoyable, and Astrid would call on someone in the audience who would talk back to her. She picks on a member of the audience in the first row to help her bring her luggage out at the end of the show.

An experimental song which had a recorder play back voices and sounds from different objects such as balloons was an innovative number the two put on towards the end of the show. An encore highlighted the show as they danced in unison, singing almost like a vaudeville/cabaret act.

This was an entertaining 90-minute show from this brother-and-sister team, and it's worth the $16 to come and see them perform.