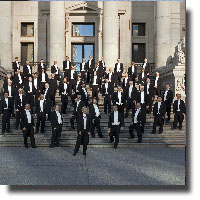 I had heard lots of good things about Chor Leoni Men’s Choir, but the name always brought to mind rows of solemn men in suits singing serious songs. I turned up at the first evening performance of Chor Leoni’s off-the-wall new show Bard Boyz and soon realized that solemn and serious are the last two words I would use to describe this mad-cap group!

I knew Bard Boyz was Chor Leoni’s take on boy bands throughout the ages, but I was expecting only five or ten bands to be represented – in reality, there were many, many more! Audience members were treated to a vocal voyage through the last century, and while the first half of the show was slower paced, it definitely picked up for the second half when I began recognizing more of the music. The best number of the night in my opinion was an incredibly choreographed and energetic Backstreet Boys number that had even the elderly screaming and cheering in their seats like overexcited teenagers. I don’t want to give away the “surprise guests” of the evening, but they gave a performance that was an incredibly believable impersonation of the real deal. Other highlights of the night included a fun performance by “The Monkees”, and some junior members of Chor Leoni performing the Jackson Five. I hesitate to give away too much more; it was much more fun not knowing what to expect next.

I was surprised to see the wide age range of performers – there were several decades represented on stage. The entire choir looked like they were having a blast on-stage which made the show that much more enjoyable. I wish I could have identified some of my favourite performers by name, especially the incredible lead vocalist in the encore number, but perhaps it is for the best that the entire choir gets the credit for their collective performance as each voice brought something special to each number even if it was “just” providing background sound effects to set the mood. The wacky and colourful costumes were a blast and had the audience in stitches.

The venue, Bard on the Beach's Mainstage Tent in Vanier Park was a great location with great scenery that added to the performance. This is a great show for generations to enjoy together – grandparents, parents and grandchildren will enjoy sharing their favourite music with each other.